Benefits Of Kiwi - The God's Fruit

Do you know why Fruits are the essential components in your diet?

Other than being tasty and palatable, they have a huge role to play in the maintenance of your good health. Fruits are rich in fibre, vitamins, and minerals which affect your body's nutritional status and health. They help you to develop immunity for various diseases and fight illnesses if any.

You might know about the 'Kiwi' fruit. It is also known as the God's fruit. But why such a name? Want to find it out? Scroll till the end and unveil the treasure of the health benefits of kiwi.

Kiwi fruit is the native of China which was taken to different parts across the world. At first, it was called the Chinese gooseberry but then because of its similarity to the kiwi bird of Newzealand, it was named Kiwi.

You can try out this brown egg shaped fruit full of bright green juicy flesh with black seeds in juices, chutney, jams, fruit salads, and desserts like puddings, cakes, etc. But what does it have to offer you with?

You can also buy these products:

Anti-aging And Maintenance Of Healthy Skin

The micronutrient which is available in abundance is Vitamin C which is around 64 mg per kiwi. People would prefer you to go for oranges for vitamin C content but a kiwi offers you with twice or even thrice the amount of vitamin C present in an orange. This is what makes it special as Vitamin C is the nutrient which protects your skin from wrinkling.

Being high in antioxidants like Vitamin C and choline, kiwi helps the cells to recover and hence makes the skin healthier. The presence of vitamin E helps in dealing with skin disorders as well as any sort of damage from the sun.

Have you heard that there are some fruits available which can be consumed by a diabetic like guava? Yes kiwi is one such fruit which aids in controlling the blood sugar levels as it has a low glycemic index.

People with diabetes are recommended to eat foods which have a low glycemic index and kiwi is one such blessing for those who crave to eat fruits. Its fibre content which is around 2.1 g in every single kiwi also makes it a fruit for the diabetic as it slows down the absorption of sugar and hence giving the kiwi fruit an edge.

As per a US report, 1 in every 3 Americans have hypertension or high blood pressure and a lot of them might not be aware about this problem of theirs. If not controlled it can even lead to death and hence to control it, a kiwi can be the choice for you.

A kiwi has around 84.2 mcg of lutein and zeaxanthin. According to some research lutein helps in reducing the levels of hypertension.

You all must know that with age the eyesight declines and somehow vision gets blurred which might require you to adorn the specs or lenses but you can cut down that risk too. As mentioned earlier, lutein and zeaxanthin are the two carotenoids which are related to vitamin A which in turn helps in good eyesight or vision. It protects your eyes from vision loss which might occur due to macular degeneration.

Isn't it a magnificent fact about kiwi? Surely it is a great fruit to have.

As kiwi is rich in several nutrients it even cures the most common problem of hair loss by nourishing the scalp and hence promoting hair growth. It is the case due to the presence of various vitamins like Vitamin E (1mg), Vitamin K(72.5mcg), Vitamin C(64mg) and others.

The content of minerals is also good and the one which proves to be the best for hair is zinc which is present in kiwi. It helps to repair the cells and provides nourishment to the hair follicles.

Kiwi is a tremendous fruit for you to deal with the problematic insomnia which makes your lifestyle a lot more different. You might end up having a lot of stress both physically and mentally. Feeling tired and lazy is common for those who are insomniac and hence you might opt for this wondrous fruit, the God's fruit - Kiwi.

It has a variety of antioxidants and especially serotonin which results in better sleep. And its Concentration in a kiwi is more than 3 zg. And with it comes the benefits of regulating the mood, stress and appetite.

Prevention Of Cardiovascular Diseases And Cancer

Yes, kiwi are capable of preventing cell damage. The free radicals in your body might increase the oxidative stress which ultimately leads to damaging the cells and gradually this damage can lead to heart diseases and cancer.

Heart diseases like atherosclerosis is a stressful situation, but a kiwi is full of multifarious antioxidants which reduces the oxidative stress on the cells by cutting down all the free radicals from your body and hence preventing the chances of cell damage if any.

Deals With Complications During Pregnancy

There have been tons of cases in which women have to deal with complications during pregnancy which might affect the  baby adversely, causing birth defects. It might be related to the nervous system which can cut down the abilities of the child.

But a kiwi is the one which can eliminate these risks as it has vitamin B9 or folate of around 17.2 mcg. Folate is necessary for growth, the production of red blood cells and to carry out certain functions in the body. And hence it protects the fetus from any sort of birth defects. 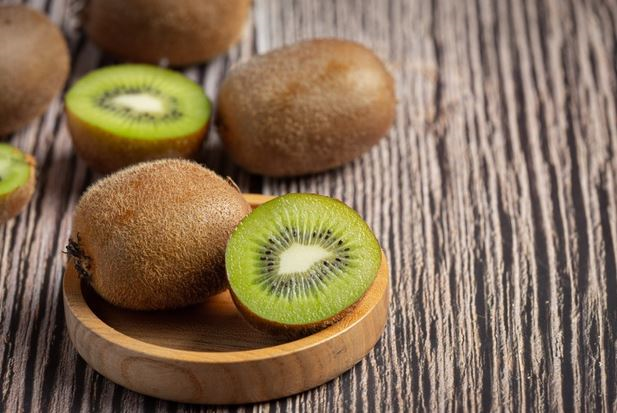 So these were the 8 major benefits of adding up kiwi in your diet. But these are just a few, there are many others like the bone health which is promoted because of the presence of vitamin K and calcium and the appetite advantage not to forget.

And don't you doubt about its availability as it is available in the market and even its products like jams, syrups, squashes, juices, dried candies are also provided. So what are you waiting for? Just give God's fruit a go.