The smartphone technology is witnessing multifarious trends and advancements and hence the market has become a competitive one. The latest competitors in the market are iPhone 12 and Samsung Galaxy note 20 ultra.

Both of the models blended the new technologies with new ideas and are going to be the trend setters. The competition between these two is neck to neck. But which one has got that extra edge of being a better choice for you. Let's dig it out. 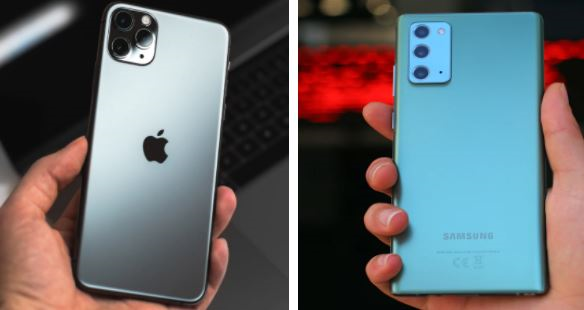 On one hand while the iPhone 12 series has a super retina XDR display with 2778 × 1284 resolution and on the other hand Samsung has provided a dynamic OLED 2X display with 3,040 × 1440 resolution and 120 Hz full HD refresh rate which provides you with better experience in touch response and gaming in the latest note 20 Ultra. Here Samsung takes the edge clearly.

Having a good look at the processors of both the models is going to be tough as both have come up with their best. The iPhone 12 series has Apple's latest A-14 bionic chip and Samsung Galaxy note 20 Ultra has Qualcomm snapdragon 865 plus available in the US and for Europe and other regions Exynos 990 is provided.

Both have their own specifications but here too Samsung has grabbed the competition due to the slow animations and millisecond of latence in the Apple's model.

As the storage is concerned, both the biggies come with three variants which are 128 GB/ 256 GB/ 512 GB and in Samsung's model you would surely get an extra option of inserting a micro SD card. In the smartphone market if any phone has the RAM of 12 GB then it is the latest Android phone, Samsung Galaxy note 20 Ultra while the iPhone 12 has a RAM of 6 GB.

You can also buy these:

Both the phones having three rear cameras make them a better choice for photography. iPhone 12 comes with a Lidar sensor for recording depth information, wide sensor, ultra wide camera, and telephoto shooter. All the cameras are 12 mega pixels while in Samsung's model, the primary camera or the wide sensor is of staggering 108 Mega pixels and hence giving it that extra edge again.

Both the latest models in the market are a boost in the connectivity scenario as they support 5G connectivity. While the Samsung Galaxy note 20 Ultra is the one which may connect to the 5G Network wherever available all across the globe.

Samsung Galaxy note 20 Ultra comes with a 4500 mAh battery while the iPhone 12 series has a battery of about 3687 mAh. Both allow. USB and wireless charging, Samsung allows 25W wired charging, 15W wireless charging while Samsung has an add on feature which allows it to reverse charge other accessories like ear pods with about 4.5W.

While Samsung's model supports both the fingerprint and face lock, Apple's iPhone still lacks the touch id and has just the option of a face id.

Pacific Blue, Gold, Graphite, Silver, these are the color variants available in iPhone 12 series while in Samsung galaxy note 20 ultra you may get a Mystic Bronze, Mystic Black, and Mystic White.

Both of the models are IP 68 certified which means that they can be immersed in about 1.5 meters of water for half an hour and this gives you a better resistance to water and dust.

While Apple made a shocking decision of just providing the USB cable along with the phone and not providing any other accessory, even the adapter, Samsung on the other hand provides an ejector tool, a travel adapter and the USB cable of type C. And being the galaxy note, it comes with an S pen which will be pre-installed in the phone for you to write on the screen. It'll definitely give you the feel of writing as if on the paper itself.

So these were the key features one must consider while opting for either the android phone or the iOS in case of Samsung galaxy note 20 ultra and iPhone 12 series. It can be a cakewalk for you to find out which one has that cherry to make it your choice. Samsung galaxy note 20 ultra has a clear edge over iPhone 12 series because of the features being provided at a much lesser price. Do make a wise choice before investing in your valuable money.