The Prime Minister today laid the foundation stone for several projects in Tamil Nadu and Puducherry. Under the PM Awas Yojana (Urban).

The inauguration of Tenement at Veerapandi in Tirupur, Thirukumaran Nagar in Tirupura, Rajakkuar Phase-2 in Madurai, and Irungular in Trichy will be held, the ministry headed by Hardeep Singh Puri said on Thursday. 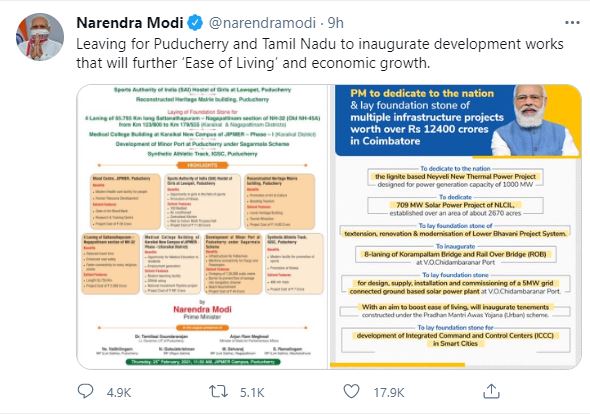 India is proud of Tamil Nadu's contribution to national progress. Powerful Tamil culture is popular all over the world.

It is an honor for the Central Government to work for the development of TN.

He will be in Coimbatore tomorrow for the inauguration of various projects, he tweeted on Wednesday.

According to the trip, Prime Minister Modi will reach Puducherry in Coimbatore at 11.30 am in the first half of the day and then at 4.30 pm. In Puducherry.

The Prime Minister will lay the foundation stone for four lanes of NH45-A, a minor port, and a synthetic athletic track at the Indira Gandhi Sports Complex.

In the meantime, the foundation stone is being laid for many more valuable projects around 12,400 crores.

Assembly elections are likely to be held in both Puducherry and Tamil Nadu in April / May.

Until then, the presidential rule in Puducherry is likely to come into force after the fall of the Congress-led government and other parties are unlikely to sue to form the government.

PM Modi will arrive in Puducherry in the first half of the day, at around 11.30 am, and, later in Coimbatore at around 4.30 pm.

In Puducherry, The Prime Minister will lay the foundation stones for four-laning of NH45-A, Minor Port, and Synthetic Athletic Track at Indira Gandhi Sports Complex, etc.

In Coimbatore, meanwhile, he will lay the foundation stone of multiple infrastructure projects worth over ₹12,400 crores.